Teddy’s are usually one of the first things to give when a baby is born.

I was reminded of my Teddy through Steffi’s blogpost.

My Steiff Teddy called ‘Zotti’ is as old as me.

He had so much love, he had to be mended.

You can see the straw on his left foot. He wears now crocheted slippers.

He used to growl when I pushed his chest in,

he had lots of fur.

He is always in good spirits and enjoys the younger generation around him.

Manny, my travelling bear (a friend of Danny from America)

and STRuppi from the Stuttgarter Airport.

Who knows what they get up to when I am not there.

Bears are for life!

Did or do you have a teddy?

Teddies get dirty too…

so high time to have a bath.

After 23/27 years they show that they were loved.

Thin on the odd fur place, squeezed flat and mended at some places.

They are all happy though as these are signs of so much love.

So a bath together was fun.

then time to rinse and dry…

Once dry they can’t wait to go back to their loved owner,

for some more loving.

I need to check in, in between my mum’s posts.

I have been traveling again to Germany – just a quick visit.

but also helping with chores.

I used all my muscles to recycle old clothes.

I couldn’t reach so I had to be lifted up.

My mum was very grateful for my help.

At the Airport in wonderful sunny weather

I was treated to my own “Strandkorb” – Beach basket

to relax on the visitor’s terrace watching planes.

That was just so cool.

Big hugs from Danny for all my friends.

Danny travelled again for the weekend. 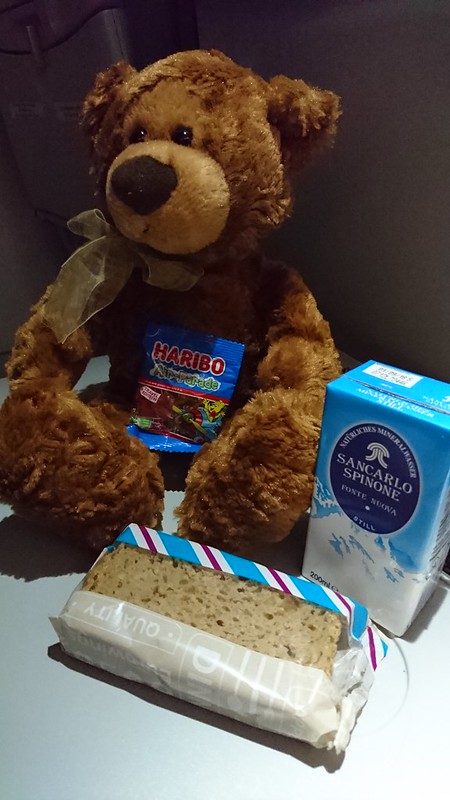 On the plane with a snack 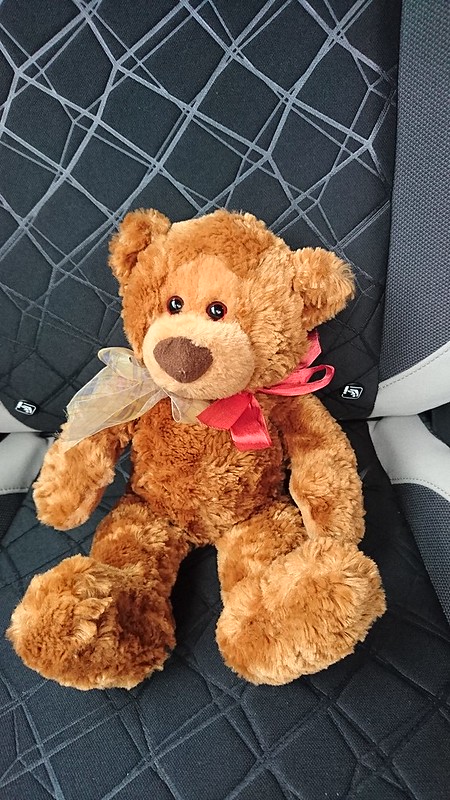 in the car to the house.

In Stuttgart Airport Danny saw a many bears and talked to some.

He made friends with one, called Struppi.

Struppi then joined us on the flight back to London. 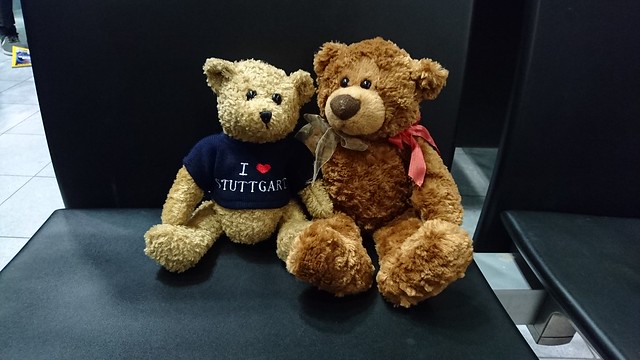 Struppi to everybody and the English life here.

Our bear family has grown!

He met Petzi, a senior teddy,

He couldn’t hold back his excitement  and jumped right up to say hello.

Then they chatted for a long time.

In town he saw water, a plastic cow,

Danny met also his other friend “Breuni” in Germany.

They enjoyed a good chat and cuddle next to Spring flowers.

which gave us a beautiful picture of this snowdrop.

Wishing you all a wonderful and

Danny’s first trip in the 2017 took him to Norfolk in England.

He planned a relaxing weekend away.

He stayed in a Mock Elizabethan Grad 2 listed Building, which is a 4 star hotel, near Norwich.

A beautiful building with fountain

First he enjoyed a wonderful cup of tea,

before going to the swimming pool to swim and relax.

Then a visit to Norwich with its castle:

The next morning was verrrrry cold….

… and it was time to go back home to London.

Now that was a calm and relaxing time.

Why not try it yourself!

At the airport in Stansted waiting for our plane… and here it comes already!

We went to see my mum’s mum in Germany and I could see my friends!

This is in the front garden, I loved this long grass!

I met ‘Brauni’, he is my gran’s teddy and we enjoyed some  wonderful cuddle time together!

This is “Petzi” my sister’s very old Steiff Teddybear… he must be about 53 years old…. oh yes I can see some grey hair…. hehe. He is lovely and still dressed in my mum’s old baby clothes. He has got plasters on his paws as the straw was falling out, but his heart is a pure loving teddy heart. We did have a great chat and a lovely time together…..and when mum wasn’t watching……. we got up to bit of mischief.

I climbed all the bushes in the back garden…. lucky I had fur it was quite cold for August.

This is the town and every time my mum visits they have changed the roads or put up new buildings. This tower is one of the old towers and part of the town wall which went all round the town. Opposite is the brand new Town festival hall. A very big building I thought.

At the end I found a picture of my mum being about 21 then… I couldn’t help myself and sneaked it in the post… hope she doesn’t notice!

This is me on our way home again…. quite exhausted….

As Danny will soon go on an adventure holiday to Spain, he needed to experience travel before.

He accompanied me to Germany.

In my rented car, he fell asleep, or was it my driving ( on the other side) ?

He loved the river and posed on the wooden bridge,

He enjoyed a bit of sunbathing near the river.

He did not behave well in the shoe shop. He had to try all different sandals on.

Still his cuteness saved him. ♥

At the airport just before taking off, we saw 11 hot air baloons in the sky, what a lovely site.

Danny has experienced being under people,

he has seen that there is so much beauty in nature,

he has seen kindness in everyone,

he has seen how enriching travel is.

All in all Danny enjoyed his short travel and he sure is ready for more adventures.

“We live in a wonderful world that is full of beauty, charm and adventure. There is no end to the adventures we can have if only we seek them with our eyes open.” – Jawaharial Nehru

“Life is either a daring adventure or nothing.” – Helen Keller

Wishing you all an adventurous day!

This is a story of an extraordinary woman, who depite physical difficulties followed her dream.

She was a seamstress and founded the Margarete Steiff GMBH 1880 which makes to this day stuffed toy animals.

Margarete was a very lively, well-built child and led a carefree life until she became ill with polio at the early age of 1½. She was destined never to walk and to be confined to a wheelchair for the rest of her life.

Her mother, above all, found this very difficult to bear. She would have to care for her daughter for as long as she lived. Her daughter would never be able to take on the role of housewife and mother and, at the time, it seemed as though she had absolutely no prospects for the future.
The apparently helpless Margarete had other ideas, however, and was full of the joys of life. She radiated a positive aura and her convivial, cheerful nature made her very popular.

She spent her free time playing with the other children whenever possible. Margarete was a creative inventor of new games. She was always having new ideas and organized the games in such a way that she could take part.

In doing this, one of her natural gifts became evident, one that was to help her a great deal in the years to come: Margarete had a way of telling people what had to be done in a manner that made them want to do it.
Following an unsuccessful operatin on her legs, she went to a health resort. After that Margarete had a lot of catching up to do in school. Being a cheerful and ambitious person, she soon brought herself up to the required level.

The next thing that Margarete wanted to do was to attend a sewing school. Her father objected to this initially, wishing to prevent her from being disappointed if she was unsuccessful. She asserted herself, though, and showed her parents once again that they had underestimated her. Although she took much longer to get work doneand frequently had to ask her sisters to help her, she became a perfect seamstress after a few years. Margarete was always trying to overcome her limitations.

When she was around 17 years old, Margarete realized that she was never going to be healed. She knew that she was going to have to come to terms with her illness in order to find peace of mind and her real way in life. Margarete’s father, Friedrich Steiff modified his house in 1874 and among other things converted the study on the first floor into a dressmakers workshop.

She started making stuffed animals as a hobby.

These toys began as elephants, which were originally a design Steiff found in a magazine and originally sold as pincushions  to her friends. However, children began playing with them, and in the years following she went on to design many other successful animal-themed toys for children, such as dogs, cats, and pigs. She designed and made most of the prototypes herself.

Margarete Steiff was just 61 years old when she died on 9th April 1909.

What had originally seemed to be a hopeless life became a shining example of what can be achieved with courage, strength, heart and willpower.

What an inspiration, what a positive and amazing woman!

Nowadays Steiff animals are famous with the yellow “Knopf im Ohr” and the label with the name.

My squirrel “Perry” with his original label

I am lucky to have got some Steiff animals as a child. I still have them here. Now they are rather expensive!

My favourite teddy whom I loved dearly. So much loved that the straw is coming out of his paws. Yes, in those day it was straw! Still cuddly and lovable!

I loved this monkey and chewed on his thumbs, hence they are broken and the straw shows…..  poor monkey!

There is a movie from 2005 which is a wonderful life story of her which is well worth watching.

Her biography was taken from her website, see below.

Since I have redone my bedroom with new furniture and pictures, I needed something to complete it.

I have a new lodger in my flat and he is well loved already.

He came to me to work yesterday and I took him home straight away.

Some of you might recognise him, as he is related to Manny from Marsha’s blog. He has the same ancestors.

Of course he had to check his new room out straight away and sat on different furniture.

We are getting to know each other at the moment and I am sure it will develop in a wonderful friendship!

So far we had a lovely day together and enjoyed each others company! He loves blogging too and will give me some advice, and probably do a post by himself one day !

He loves lots of hugs,

and is so cute!

A big Welcome to Danny!